Everything is a phase, everything is a phase. I repeated to myself to calm my nerves after being repeatedly stuck by my toddler.   At this daunting moment, a few months ago I had a child kicking and screaming, a red spot on my face, tears in my eyes and knew something had to change.  The ‘terrible twos’ were pretty rough for us-rough being a pretty big understatement.  Our little girl had many, many meltdowns.   She also has a challenge that only a few other toddlers have to deal with, a younger sibling that is less than a year and a half younger copying everything she does and wanting to play with all the same toys.   Thus ensued the meltdowns- I’m sad to even admit she started hitting me often and occasionally her younger brother.   This upset me a great deal to have her lash out and hit me over and over again.  I would cry my eyes out after being hit, scratched, and even had my hair pulled out by my own child.  I felt like a dog owner scared that their own dog might bite them.   We don’t hit in our house for punishment so I wasn’t even sure where she was picking this behavior up. 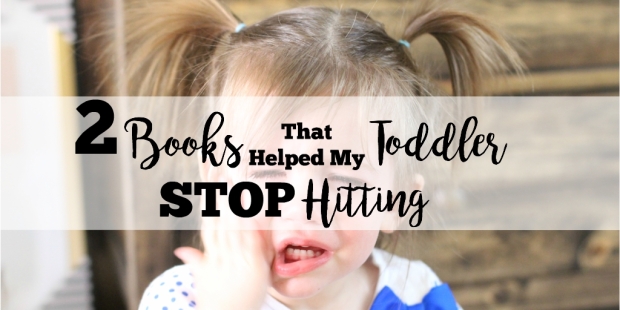 My first step as a mom with parenting troubles was to reach out to other parents.   Most of my mom friends have boys and weren’t seeing the same over dramatic and aggressive behaviors.   Some of the parents I talked to said “hit her back.”  This didn’t sit well with me, being an educator I know you can’t solve hitting with hitting- its like assigning writing for punishment.   I even reached out to one of my best friends who has a Master’s Degree in psychology for help.   After she reached out to some of her colleagues who deal with children we mostly got to a dead end that you don’t truly have a problem on your hands until the child is five.   My first thought was-I can’t live like this for three more years!

I ended up trying to figure out why my daughter was frustrated and angry-when and why was she throwing these fits and hitting.   She was an early talker and has a great vocabulary for her age so I didn’t think it was a communication problem, it was a “control or express your anger problem.”   The teacher in me knows with a great story and positive reinforcement like I would use on my students for classroom management I could help my little girl work on this issue.    I ended up finding two great books No Hitting by Karen Katz and Keeping Your Cool: A Book About Anger by Carolyn Larsen on Amazon.  (Thank goodness for Amazon Prime!)

These books were so great for my daughter to learn why we don’t hit AND what are good ways to express anger and frustration.    Those emotions we know as adults never go away but we can get them out.  Me personally, I get them out by getting in a good workout or dropping an F bomb because that can really calm me down, but as toddlers we don’t know how to appropriately express this anger.  I then found my mission, I needed to find ways for my toddler to get out those emotions in a healthy manner.   My daughter loves to read so I knew a fun new book could really open her eyes on this subject.    After a couple rocky months of doing positive reinforcement, time outs, and reading both of these books every so often (the book No Hitting my daughter has even memorized) I can say that I feel like we are over this hitting slash stage 10 nuclear meltdown-for now anyways.   These two books, No Hitting and Keeping Your Cool really helped us out and they are so inexpensive definitely give them a try!

Your Redlocks and Shamrocks Girl,

**This blog post contains affiliate links.   The thoughts, opinions, and writing about the products are my own.

9 thoughts on “Two Books That Helped My Toddler STOP HITTING”

Redlocks and Shamrocks is a blog by Lisa Doyle-a supermom in disguise. On this blog you will read about the crazy life of a mom of two under two and her passion for parenting, photography, fashion, and life!